NHK & Chef David Bouley’s documentary:
“The Magic of a Dish:
great journey of training in Japan”
EPISODE 1: Summer
view on NHK WORLDWIDE ON DEMAND until November 10, 2019

THE MAGIC OF A DISH: New York Top Chef Goes to Japan

Acclaimed NY chef David Bouley has delighted celebrities with his innovative French cuisine spiced with “Bouley Magic.” Now in his 60’s, the gifted chef sets out on a journey to learn and explore new gastronomic horizons. His goal: to create the finest healthy cuisine unlike anything we’ve seen before. To this end, Bouley travels to Japan in pursuit of knowledge. This story follows him through summer in Okinawa Prefecture and Kyushu.

His first stop is Ogimi Village in Okinawa, known as a village of longevity. Here, elderly people over 90 actively engage in farm work and sports. Speculating that the secret to longevity is “food,” Bouley learns about local traditional food, vegetables and herbs unique to Okinawa, and seaweeds that he has never seen before to create original and dazzling dishes. In Kyushu, he visits craftsmen passing on traditional fermented foods like Kurozu (black vinegar) made by fermenting mash, and dried bonito made by repeating a drying-and-molding process to enhance umami. Bouley also makes a stop in Kumamoto Prefecture to visit a chef and growers affected by the 2016 earthquake and inspires them with his “Bouley Magic.”

THE MAGIC OF A DISH: New York Top Chef Goes to Japan

Acclaimed NY chef David Bouley has delighted celebrities with his innovative French cuisine spiced with “Bouley Magic.” Now in his 60’s, the gifted chef sets out on a journey of training to learn and explore new gastronomic horizons. His goal: to create the finest healthy cuisine unlike anything we’ve seen before. To this end, Bouley travels to Japan in pursuit of knowledge. We follow him as he visits the mountainous inland region of Nagano Prefecture and Noto Peninsula that stretches into the Sea of Japan.

It’s winter in Nagano. In the 1960’s, stroke mortality in Nagano Prefecture was alarmingly high. But thanks to efforts by doctors to promote dietary changes to reduce salt intake, the people of Nagano now have one of the highest life expectancies in Japan. Bouley learns how “kanten” is made by boiling down and drying algae using the cold winds that blow from the snowy mountains. He also peeks inside a local’s kitchen and gets a hands-on lesson from a housewife on making “sunki,” a rare kind of pickle made without using salt. The unique taste and texture of the local health foods stimulate his creativity. In Noto Peninsula, he learns the secret of making sake lees and soy sauce. Exploring his newly acquired knowledge, he creates an exciting fusion of Japanese and Western cuisine using fresh local fish and fruits and … a touch of “Bouley Magic.”

Acclaimed NY chef David Bouley has delighted celebrities with his innovative French cuisine spiced with “Bouley Magic.” But to everyone’s surprise, Bouley, now in his 60’s, has closed his flagship restaurant to set out on a journey of training. He’s headed for Japan in search of the finest health food. We follow him as he studies the art of traditional fermented foods across Japan that inspire the creation of his ultimate dish.

Bouley travels across Japan to learn about the traditional foods of various regions; the “tofu-yo” in Okinawa Prefecture made by pickling tofu in red malted rice and Awamori (strong Okinawa liquor), salted mackerels in Fukui Prefecture called “heshiko” that are pickled in rice bran, and Toyama Prefecture’s Koji (malted rice) used for preparing miso. In the northern island of Hokkaido Prefecture, he meets craftsmen who share their knowledge of producing kelp to make the tastiest stock and of the technique of Ikejime (a way to kill the fish without stressing it). Here, he happens to encounter the great earthquake. Bouley encourages the people affected by the disaster with his magical food. Returning to NY, he heads straight to his kitchen to work on new recipes. Exploring the knowledge and skills he learned in Japan, he creates dish after dish of exciting and innovative food. In the hope of leading people to healthier food, what does the gifted chef create as the ultimate dish?

A super talented Chef David Bouley in New York closed his flagship restaurant and set out on a journey around Okinawa, Nagano, Noto, Osaka and Hokkaido to improve his knowledge about healthy cuisine!
He was trying to make the highest beautiful health dish !
This is the special and rare gourmet show!

Join to be notified of upcoming Bouley Events, The Chef and the Doctor Series, Holidays and Special Menus and US release of Documentary.

The Chef and the Doctor

PAST EVENT:
Tempura Matsu Pop-Up in Bouley at Home 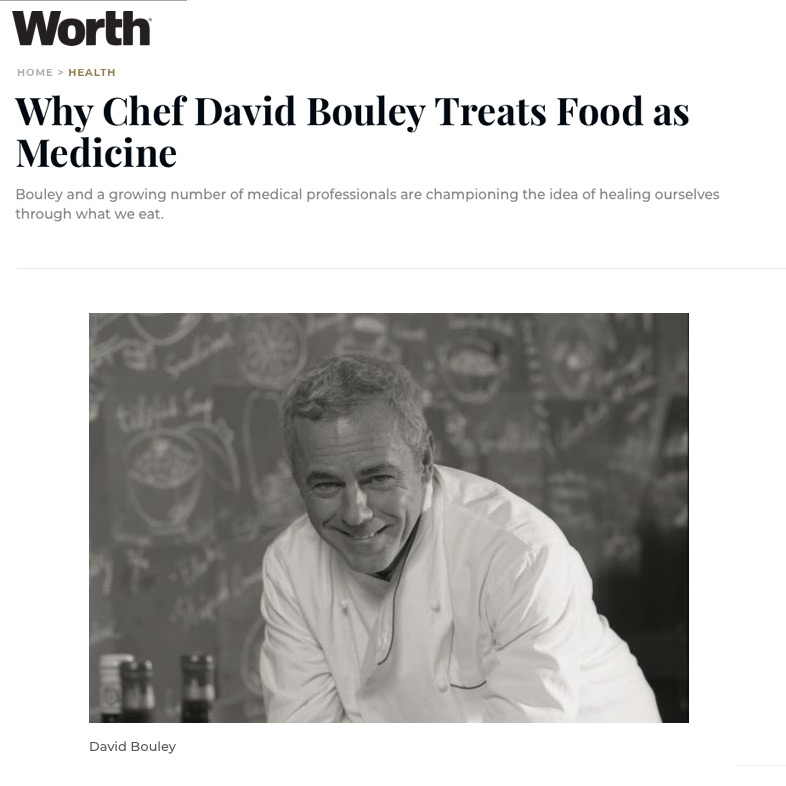